Editors from Vox.com sat down with President Obama for a wide-ranging interview on several domestic and foreign policy topics. Vox has earned high praise for their innovative formats and use of data “to explain the News” and clarify complex topics. After reviewing “Obama: The Vox Conversation,” I can say that the high praise is justified.

The Obama interview demonstrates a deft understanding of how to produce dynamic, engaging, and information-rich content. True to form, every clip includes statistics that clarify and add context. And carefully orchestrated motion graphics are used exceptionally well to emphasize important points, though at times, they start to feel superfluous.

For starters, Vox did a nice job with set design. It felt like you were sitting down and having an intimate conversation with the president. The subdued lighting and dark background created a slightly dramatic feel that complemented the seriousness of the subject matter. And the spare, monochromatic backdrop kept your focus squarely on Obama.

Vox also gets high marks for its video production. Using multiple cameras enabled them to capture the president from different angles and create a dynamic viewing experience. The titling also effectively set up the conversation, and the music established the mood and tempo. But it is Vox’s design and integration of motion graphics, news articles, and supporting data that get the highest scores. 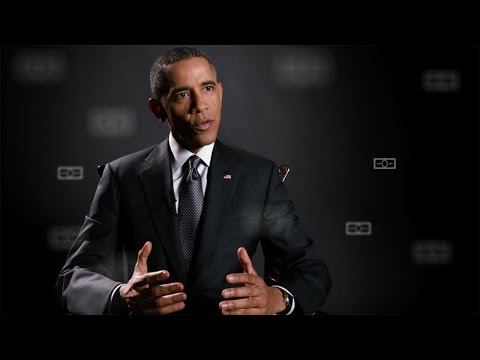 At the :23 second mark in the clip above, the president is discussing how technology contributed to the elimination of entire sectors of the economy. When he cites travel agents and bank tellers headlines from the Washington Post and Wall Street Journal—“Travel agents: We do exist!” and “Bank Tellers Battle Obsolescence” are composited into the frame. These headlines serve as proof points and add legitimacy to Obama’s commentary. And more importantly, as a viewer, you’re more engaged and informed.

Moments later when discussing globalization, the president says that “the rest of the world is catching up.” As he says that, the camera cuts to a wide shot of him raising his hands as six flags appear and move with his hands so they’re almost level with the American flag. These motion graphics do a great job illustrating a point and breaking up the visual rhythm of the video.

Another good example is the “History of federal income tax rates” graphic that appears at 1:29. To validate Obama’s statement that “tax rates today aren’t particularly high, or particularly progressive compared to the late 1950s or 60s”, Vox uses a line graph with statistics from the Tax Foundation to bear this out.

At the 1:40 mark, when the president quotes Lincoln, “there are some things we do better together, than for ourselves” in reference to building roads, power grids, and good public schools, graphic representations of a road, a power grid, and a school appear. Unlike the tax rate line graph, these graphics aren’t meant to validate what he’s saying. Instead they are used to reinforce a point and engage the viewer.

For the most part, the motion graphics and supporting data points enhance the videos, but every now and then, they feel forced. 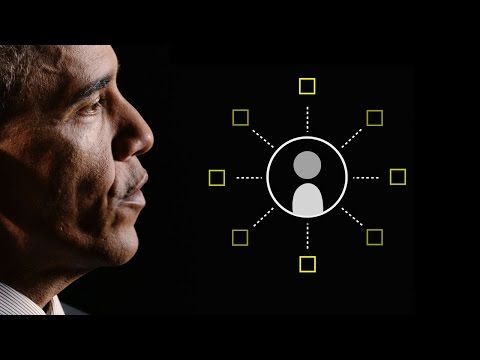 For instance, at the :14 second mark in the clip above, Obama begins explaining what he thinks contributes to the country’s polarization. When he says our politics are “…more polarized than people actually are,” his hands move in a lateral direction and a square motion graphic follows. It doesn’t add value to what he is saying and distracts more than anything else.

Another seemingly superfluous graphic appears at the :45 second mark above. When talking about “changes in labor laws” and “workers increasingly [having] less leverage” a bar chart from the Pew Research Center appears and shows declining union membership levels from 1983 to 2013. It’s not a complicated chart, but it doesn’t directly correlate to what was said. Vox is assuming that the audience will connect changes in labor laws to decreases in union membership, but the correlation isn’t obvious.

Overall, I think Vox did a great job. They demonstrated how much more engaging a video is when you don’t scrimp on production and make the effort to incorporate motion graphics, whether a data point to clarify an issue, or a visual representation of what’s being said. Both types of graphics create a more dynamic visual experience, and when used carefully, engage your audience more deeply. The enhanced production and motion graphics require a bit more planning, but they’re guaranteed to make a big difference.

And while your on-camera talent may not be as gifted and engaging a speaker as President Obama, there are many production techniques used in “Obama: The Vox Conversation” that you can replicate to improve your interview-style videos. If you’re curious how, get in touch.