5 Signs You’ve Made a Good Infographic

A good infographic used to be a supplement to the story—a bar graph in an especially dry Economist article, a pie chart in a corporate white paper. Somewhere in the last couple of years, the once-humble infographic has mutated to become the story itself.

Everywhere you look, websites are featuring infographics that are the info equivalent of the Lord of the Rings movies: colorful, dense, and good lord, when is this thing gonna end?

Some recent signs of overkill: Mashable answered the question, “Are we too obsessed with Facebook?” by producing an obsessive graphic of random trivia about Zuckerberg’s mildly successful project. Key takeaway: Mashable is too obsessed with Facebook. Search Engine Journal did something similar with social media in general (click the small images to go to the respective posts, with the full, sprawling graphics).

This is the new infographic—a 20-minute scroll through a vertical infodump—and it’s much more tiring than the focused article it’s meant to replace.

It’s time to rein in the infographic. Not that it should again be relegated to line graphs illustrating text-heavy stock reports—the Internet has opened up too many possibilities. But what if it was better-organized than a frat party and more coherent than a flash mob? What if it clearly communicated useful information that helps your customers and prospects? Then you could pat yourself on the back and call it a good infographic (and then call it a day).

Elements of a Good Infographic

When you create an infographic, make it count. Here are a few points to keep in mind during your process, as well as a few infographic examples to inspire you:

Your Infographic Tells a Story

Using clip art and numbers to create a collage of essentially disjointed data doesn’t help your reader. The graphic should tell a story or answer a question (the reason we’re reading all this data), or articulate thought leadership. You should be able to describe it in a sentence, and the sentence can’t be, “There’s a lot of information about X.”

A good infographic often distills information from a larger resource, like an ebook or blog post. Repurposing content in this way is a smart tactic. You have a deep well of information from which to draw, but the challenge is to distill it visually into something succinct and clear.

It’s Not an Article in Disguise

Look at this graphic (I’m picking on Mashable again, but they can take it). It’s little chunks of text arranged in a stack, and you have to read each of them until you hit the bottom. Once known as an article. Chopping your white paper, brochure, or blog post into colorful boxes of text delivers “info,” but just adding some icons is cheating on the “graphic” part of the equation.

The Infographic Design Serves the Data

In the quick, easy, and unremarkable infographics, the illustrations seem an afterthought. At the other end of the spectrum, check out this interactive New York Times graphic on the distribution of Olympic medals. (Screen shot below, but really, go look at the interactivity.)

It’s busy and multilayered, but there’s nothing there that isn’t part of the information delivery—which has been rethought and rendered in a visual way, rather than merely putting clip art next to a number. It’s a (no doubt costly) thing of beauty. Another fine, less elaborate infographic example: this graphical representation of the most prescribed psychiatric drugs in the United States.

Your Infographic Is Well-Organized

A lot of the “all the data, ever!” infographics are deliberate jumbles of information and font sizes. Readers should know what they’re looking at, and why. A good infographic delivers an intuitive understanding almost instantly, even before you can delve down and figure it out. 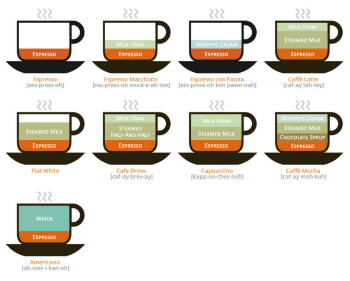 For example, look at Lokesh Dhakar’s brilliant diagram of the varying formulas for common coffee drinks. It’s not 4,000 pixels deep and full of random statistics about how many pounds of coffee come from Bolivia and the average age of caramel macchiato drinkers in Manhattan. It’s simple, it’s useful, and the images facilitate understanding in a way that scrolling through a text list of recipes would not.

If you’re going to throw up a bunch of random information about a topic, make sure you’re not trying to say anything theoretically important, like profiling an industry or business trend. Space.com marked the 45th anniversary of Star Trek with a timeline marking off highlights and trivia related to the venerable franchise. It doesn’t adhere to every rule of a good infographic, but all it’s trying to do is entertain. And less informative, but dead funny, is the ubiquitous social media Venn diagram.